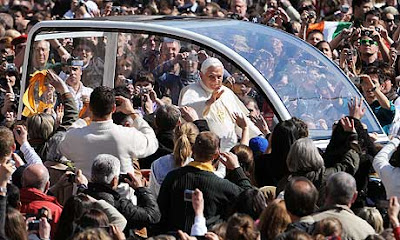 Pope Benedict XVI waves to faithful during his weekly general audience at The Vatican, where he addressed remarks to Irish followers on St Patrick’s Day

The crisis gripping the Catholic church deepened today, with calls for national inquiries to be held in Germany and Ireland to fully disclose the detail and extent of sexual abuse by priests.

With hundreds of allegations surfacing in Europe since the start of the year, the German chancellor, Angela Merkel, said the scandal of abuse in the country’s churches and schools posed a “major challenge” that could be resolved only through a full and frank inquiry into all cases.

In Ireland, which has already seen far-reaching investigations into the abuse, the Archbishop of Dublin said a national inquiry into historic claims may be the only way to fully restore confidence in the church.

The most senior Catholic in the country, Cardinal Sean Brady, resisted intense pressure to resign over his part in helping cover up the scandal.

The scale of the abuse – with additional allegations of clerical scandals emerging in Switzerland, Austria and Brazil – has caused as much alarm in some quarters as has the church’s response.

Merkel’s intervention revealed the level of concern in Germany.

Addressing the Bundestag in her first public statement on the subject, she called the sexual abuse of children a “despicable crime”. She added: “The only way for our society to come to terms with it is to look for the truth and find out everything that has happened.”

She warned, however, that “the damage suffered by the victims can never fully be repaired”. Her remarks, the most outspoken to have come from a head of government on the issue, came on the eve of a pastoral letter from the pope.

It will be published on Friday and addressed to the “Irish faithful” and he referred to it in his general audience at the Vatican yesterday. Speaking in English, he said: “In recent months the church in Ireland has been severely shaken as a result of the child abuse crisis.

“As a sign of my deep concern I have written a pastoral letter dealing with this painful situation. I ask all of you to read it for yourselves, with an open heart and in a spirit of faith.”

The Catholic church in Ireland has been the subject of devastating criticism in two reports detailing collusion, cruelty and endemic abuse throughout its institutions.

Last weekend, in a further blow to its reputation, Cardinal Brady admitted attending meetings where two 10-year-olds were forced to sign vows of silence over complaints against Father Brendan Smyth, who continued abusing children for a further 18 years. The cardinal used his St Patrick’s Day sermon to apologise for his role in the cover-up of child abuse by Father Smyth, one of the country’s most notorious paedophile priests.

Although the pope has taken an active interest in Irish church affairs – summoning its bishops to an emergency meeting – his letter may not be enough for victims and their families.

Repeated demands for openness and honesty appear to have trickled through to the Vatican. Monsignor Charles Scicluna, the Vatican official responsible for handling abuse allegations, told the New York Times yesterday: “We have to get our act together and start working for more transparency in investigations and more adequate responses for the problem.” A new approach was necessary at “every level of the church”, he added.

Visit msnbc.com for breaking news, world news, and news about the economy