The Boston Globe – By Christina Jedra

WOBURN — They gathered in a room where kids go to practice rock climbing. But as the morning unfolded, the handful of adults at the North Suburban YMCA confronted one of the most horrific things any parent could imagine: the sexual abuse of children.

Their program is called Stewards of Children because the idea behind it is that adults are responsible for preventing and identifying abuse.

The mission at the North Suburban branch of the YMCA in Woburn is to use the program to train at least 5 percent of the adults in the five towns served by the branch — about 6,000 people — so they can recognize the signs of child abuse and get victims out of harmful situations. The plan is to reach that number by 2017.

“The evidence shows that there is a tipping point when you get to that 5 percent in your community,” said Natalie Norton, senior vice president of operations for the Greater Boston YMCA . “The instances of child sexual abuse go down dramatically.”

The training sessions in Woburn, which started last month and continue through February, are free for people from Arlington, Burlington, Lexington, Winchester, and Woburn. The next session is on Wednesday at the North Suburban YMCA, and there is another on Feb. 27 at the Boys & Girls Club of Woburn.

The training, which was created by the nonprofit Darkness to Light, is also available for free online and at the Old Colony YMCA in Stoughton and the Melrose Family YMCA. The sessions are also held at police stations and other locations throughout the Boston area. In some cases there is a charge that ranges from $10 to $25.

Jodi Crowley, the Stewards of Children facilitator and member relations director of the North Suburban YMCA, said the training will have an effect.

“I want to make sure my little boy is protected in my community,” said the Woburn resident, who has a 7-year-old child. “We wanted to make sure that all five towns that we work with know how to better protect their children.” 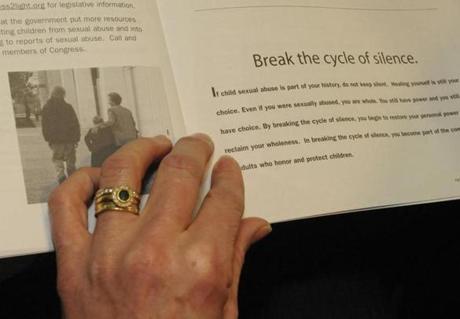 LISA POOLE FOR THE BOSTON GLOBE
Lisa Young read a brochure during the program.

Crowley estimated that the program will cost the YMCA about $20,000 this year for facilitator and participator training in the five towns, and it will require fund-raising.

“It’s not an inexpensive program, but we strongly feel it’s worth the investment,” she said.

The training program, which lasts about three hours, is an evidence-based lesson with three sessions in which a video is viewed, followed by a workbook exercise and a discussion period. The film presents firsthand accounts from victims including Mark Serrano, who was sexually abused by his priest, and Marilyn Van Derbur, a former Miss America and victim of incest by her father.

Throughout the video, experts in areas such as social services, child advocacy, and psychology comment on related topics, including the psychological effects of abuse, the financial cost of recovery, why many victims never tell anyone, and physical and behavioral signs to look for in children who may have been abused.

Deirdre Higgins, a Stewards of Children facilitator and a former educator, said there is an undeniable need for more awareness.

Darkness to Light estimates that 1 in 4 girls and 1 in 6 boys are sexually abused before they reach adulthood.

“I have seen so many sexual abuse cases where people don’t know what to do,” said Higgins, a parent from Arlington who is a volunteer and member of the fund-raising board at the North Suburban YMCA.

Darkness to Light is revamping the Stewards of Children program and will make new materials available this summer, according to Crowley.

Susan Komisar Hausman, a program consultant at the Old Colony YMCA in Stoughton, said the new presentation will be shorter, more concise, and will include more of the information trained individuals ask for in their post-session evaluations.

“In terms of delivering information about how to respond to a child who does disclose [their experience with abuse], people want more,” said Hausman. “Some people have suggested we do mock situations in the training.”

As a child sexual abuse survivor herself who has trained more than 500 Stewards of Children attendees, Hausman said she believes in the program’s mission and has seen the difference the course makes.

“They have a different lens when they leave,” she said.

Norton said that the current training received a great response in Melrose, where the community has made an effort to educate residents about sexual abuse after a YMCA employee was arrested for sexually assaulting two girls in 2009 and later pleaded guilty.

“There were instances of people coming back, saying, ‘I had the opportunity to intervene,’ ” Norton said.

Diana Brennan, branch executive director at the Melrose YMCA, said that the former employee’s crime was a stimulus to take action. The Melrose branch still holds training sessions with Darkness to Light materials in what they call Shine a Light .

“We really owed it to the community to take a proactive stance, to do everything we could to prevent it from happening in the future,” Brennan said.

Brennan said that the prevalence of child sexual abuse is shocking.

He noted that participants in every class in the Melrose program have offered personal stories.

“We’ve always had somebody privately disclose their connection or battle with sexual abuse,” she said. “It’s a real reminder that this is more prevalent than society really wants to talk or think about, so we will continue.”

A man who took part in the training in Woburn last month said that, as a 12-year-old boy, he was a victim of sexual abuse by his priest.

“I never came forward. I never told my family,” said the man, who asked to remain anonymous. “I believe that this trauma really affects peoples’ lives.”

After a battle with addiction for more than two decades, he said, he overcame fear to attend the session last month and was considering becoming a facilitator for future abuse prevention programs.

Norton stressed the importance of educating more adults about child sexual abuse, because children often do not suspect danger when it is near.

“Kids are really educated on being aware and ‘Don’t talk to strangers’ and all those kinds of things, and that’s great,” said Norton.

However, she cited a Darkness to Light statistic: 90 percent of children who are sexually abused know their abuser.

“It’s their uncle. It’s their aunt. It’s their baby sitter. It’s their mother or their father,” she said. “It’s somewhat challenging to educate kids about that.”