Safety Exit
HomeWest Virginia State Police Take Up the Fight
Finally, a story about child sexual abuse in which PREVENTION is promoted! 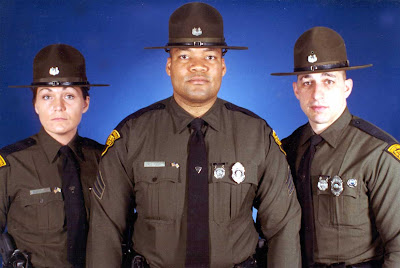 By Alison Knezevich
Charleston Gazette
To read about steps you can take to prevent child sexual abuse, click here.

CHARLESTON, W.Va. — The burned, blistered hand of a child. Blurred faces of kids victimized by pedophiles.

State legislators saw those images and more Tuesday, as they watched a video produced by State Police. The video was meant to highlight the problem of child abuse in the Mountain State — and persuade lawmakers to fund more troopers who fight crimes against children.

Standing with state troopers, Kanawha County sheriff’s deputies and other police officers in the

In his State of the State address last week, Manchin announced that he wanted to give more state funding to the unit, which now has 12 troopers.

The governor said West Virginians would be shocked to know how widespread child sexual abuse is.

“It’s one of those things [that’s] out of sight, out of mind,” Manchin told lawmakers. “It is an underground problem.”

The presentation focused particularly on Internet-based crimes against children. In the last 30 days, about 1,000 computers in West Virginia were used to store or distribute child pornography, according to statistics given to legislators.

Between 100 and 300 children need to rescued from exploitive situations, State Police say.

The presentation featured statistics such as those, plus maps that showed how many computers in West Virginia might be storing child pornography.

Child advocates say they are pleased Manchin is putting a spotlight on child abuse. They also hope that public attention and spending will go toward preventing abuse.

Today, experts believe it is just as important to educate adults about how to prevent abuse against children in their communities, he said.

For instance, programs such as Stewards of Children — developed by the national abuse-prevention group Darkness to Light — train adults to prevent, recognize and react to child sexual abuse, he said.

Research shows that one in four girls and one is six boys are sexually abused by the age of 18, said Emily Chittenden, state coordinator of the West Virginia Child Advocacy Network.

“I think that this is a piece of the puzzle,” she said of the governor’s presentation Tuesday. “The Internet gets a lot of attention because it’s new and difficult [to investigate].”

The network is a coalition of the state’s 20 Child Advocacy Centers, which work to coordinate investigations and interventions in child abuse cases.

“There are significant needs for abused children in our state,” Chittenden said. “Once they disclose the abuse, we have difficulty getting them appropriate mental health and medical interventions.”