Child abuse, and child sexual abuse in particular, are still major taboos in our society. Only by shedding light on such dark topics can we ever expect to see a positive change.

“Darkness can not drive out Darkness, only Light can do that.” MLK

The film “Precious: Based on the Novel ‘Push’ by Sapphire” is a hard story to watch with its excruciating depictions of sexual, physical and emotional abuse of a 16-year-old Harlem girl. But that doesn’t make it any less valuable a film — think of it as a starting point for important discussions about the dirty secrets that many would rather keep hidden. Lee Daniels, the film’s director, calls these the hard truths that must be told. “That’s what cinema’s about, ultimately,” he has said.

He’s not alone in showing the ugly side of life. Hollywood has a history of shining a light into 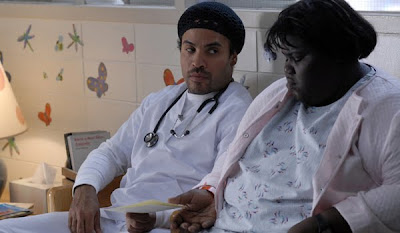 those dark corners of human behavior (“Pretty Baby,” “Mommie Dearest,” “The Color Purple”) — obsessively, some might say. But given the number of films tackling such grim subjects over the years, the Motion Picture Academy of Arts and Sciences has largely avoided them.

Despite the best picture win last year for “Slumdog Millionaire” — a story with scenes of children being mutilated so they can earn more as street beggars — and “Precious’ ” own momentum as an Oscar contender, the top trophy is often hard to come by for such films.

“Child abuse is not a topic that entertains like people generally want to be entertained at the movies,” says Antwone Fisher, who wrote the screenplay for the film of the same name, his own true story of surviving child abuse.

It was Denzel Washington’s directorial debut, and though the film did well with audiences and critics and won numerous other awards, it was ultimately ignored by the academy. “Who wants to sit in a theater and feel like they’ve been assaulted watching a vulnerable child get assaulted?” Fisher asks.

He remembers having this discussion with Washington, and “it was decided that while we could have made the film a lot tougher in many places, we wanted people to leave the theater with food for thought,” and not completely shut down, he says.

It’s true that, of this type of film, the ones that fare best with the academy are those that keep the actual child abuse off-screen — such as “Good Will Hunting” and “Mystic River” versus those with a more in-your-face stance, such as “Monster’s Ball,” “Bastard Out of Carolina” and “The Woodsman,” on which Daniels was a producer.

It’s what visiting assistant UCLA film professor Maria Elena da las Carreras calls the trick of “an intimate view of an implied horror,” versus what the famed French filmmaker François Truffaut labeled the “massacre of purity, the defilement of innocence,” a phrase he used when discussing, of all things, Alfred Hitchcock’s work. Child abuse in film “is really contemplating the abyss,” says De las Carreras. “It’s such a brutal and ugly topic, most people will instinctively turn their heads.”

Why then does gritty violence in other forms, such as war, action and crime films — often far more bloody and visually brutal — become not just acceptable but often translates to big box office and multiple Oscars?

One possible answer: The dominant culture — in Hollywood and the U.S. in general — is male and white. Psychologists say it is difficult for the dominant cultural psyche to come to terms with a subject as emotionally charged as child abuse except in forms that support its own thinking, even if on a subconscious level.

Thus, “American Beauty” was the only film with even the hint of child sexual abuse to win a best picture Oscar. (In it, a white, middle-aged father fantasizes about having sex with his teenage daughter’s friend and, in fact, the original script had consummation of the relationship, but it was edited out.)

Documentaries that tackle this sensitive subject tend to fare better at the Oscars with “Deliver Us From Evil,” “Capturing the Friedmans” (both nominated for best documentary) and “Born Into Brothels,” which won the prize. Says Amy Berg, director of “Deliver Us,” it’s “a topic that’s in the news, so maybe people are better equipped to deal with it in a nonfiction way.”