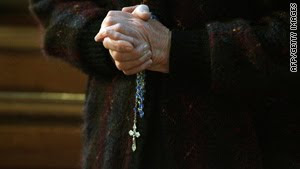 Hartford, Connecticut (CNN) — A bill in Connecticut’s legislature that would remove the statute of limitations on child sexual abuse cases has sparked a fervent response from the state’s Roman Catholic bishops, who released a letter to parishioners Saturday imploring them to oppose the measure.

Under current Connecticut law, sexual abuse victims have 30 years past their 18th birthday to file a lawsuit. The proposed change to the law would rescind that statute of limitations.

The proposed change to the law would put “all Church institutions, including your parish, at risk,” says the letter, which was signed by Connecticut’s three Roman Catholic bishops.

The letter is posted on the Web site of the Connecticut Catholic Public Affairs Conference, the public policy and advocacy office of Connecticut’s Catholic bishops. It asks parishioners to contact their legislators in opposition of the bill.

The “legislation would undermine the mission of the Catholic Church in Connecticut, threatening our parishes, our schools, and our Catholic Charities,” the letter says.

The Catholic archdiocese of Hartford also published a pulpit announcement on its Web site, which was to be read during Mass on Sunday, urging parishioners to express opposition to the bill.

The bill has been revised to address some of the church’s concerns about frivolous abuse claims against it, according to Connecticut state Rep. Beth Bye, one of the bill’s sponsors.

“The church didn’t recognize that this bill makes improvements,” Bye said. “The victims — their lives have been changed and some will never recover from years of sexual abuse. For me, it’s about giving them access to the courts.”

Under the bill’s provisions, anyone older than 48 who makes a sex abuse claim against the church would need to join an existing claim filed by someone 48 or younger. Older claimants would need to show substantial proof that they were abused.

“They were worried about frivolous lawsuits and so we made the bar high,” Bye said.

The bill does not target the Catholic Church, she said.

The bishops’ letter raised concerns that the bill would allow claims that are 70 years or older, in which “key individuals are deceased, memories have been faded, and documents and other evidence have been lost.” The letter said that the majority of cases would be driven by “trial lawyers hoping to profit from these cases.”

The bill passed in Connecticut’s House of Representatives, and Bye said the state Senate should vote on it in the next week or two.
It’s amazing as well as upsetting that Connecticut’s Bishops are “imploring” their parishioners to oppose this bill. Would they rather harbor pedophiles in their churches? In a time when the Catholic Church needs all of the positive PR they can get, actions like this only work to raise more questions about the churches’ motives and policies.