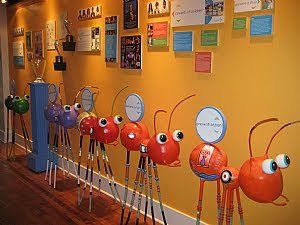 Jeffrey Kennedy, a local artist, has decided on the latter, building giant metal ant sculptures that “march” all over downtown Charleston. However, these colorful and fun ants do much more than creep up on the Chinese takeout you left on the kitchen counter last night.

All sizes of wire and clay ants are on parade to raise awareness for the prevention of child sexual abuse with a campaign called The Ants Go Marching Down King Street, a collaborative effort between national non-profit Darkness to Light, the King Street Marketing Group, and the artist. Kennedy has been working with D2L since 2003, when he built a 7-foot sculpture that was placed in the middle of Marion Square. And he has since built many other critters in the name of preventing child sexual abuse. Vibrant and offbeat, these ant sculptures represent the strength and courage needed to fight child sexual abuse, and are a fun learning tool for the kids.

“Being partners with Darkness to Light is a very humbling experience not only for using my art as their symbol but also inspiring people to join the fight against child sexual abuse,” says the artist about his traveling ant show.

Every week the ants travel a different route. Check them out this week as they parade from Calhoun to the Crosstown at various restaurants and boutiques. Next week, the ants will be taking a little stroll from Cannonborough to Elliotborough.

Find out more about Darkness to Light and how you can help!
Check out more of Kennedy’s artwork.