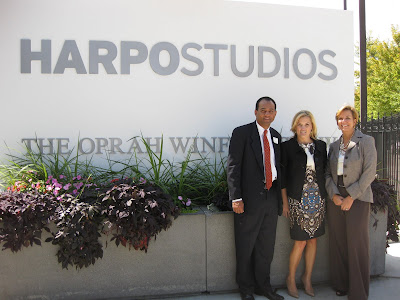 Last week was a productive week at D2L! We traveled to Chicago to meet with Urban Ministries Inc. and are very excited about working closely with them to spread the message of prevention and keeping children safe. UMI is the leader in providing biblically based programs to churches and individuals in the African American community. Our new friends at UMI are an impressive bunch and their passion for their work is contagious! We are honored to be participating as a beneficiary at their upcoming 40th Anniversary Gala in September and are looking forward to developing a strategy for working together.

While we were in the Windy City, we were able to meet with producers at Oprah! Oprah will be airing a show on male survivors of sexual abuse in late October. They taped a short segment with D2L Founder, Anne Lee! They haven’t settled on the final content yet, but they taped Anne with the hopes of including the clip and other information about D2L on the Oprah.com site when the show airs! They were kind enough to give us a tour of Harpo Studio too. Cameras aren’t permitted inside the building, but we couldn’t pass up the photo opp outside of the building. (Pictured are Terence Chatmon, UMI President; Jolie Logan, D2L COO; and Anne Lee, D2L CEO.)